Teams enable Users to collaborate on Projects. A Team account is similar to a User account, and will allow you and your Team members to use the same Services, Jobs, Pipelines, and more.

You can manage Team members with role-based access control (RBAC), creating different levels of access and permissions for Users.

You can also manage API access by creating API key templates for Team members to use.

You will learn how to:

This section also refers to:

You can create as many Teams as needed. Yet in most cases, it suffices to create one team and manage access with role-based access control.

If you need to invoice different accounts for Projects, you will need to create a new Team to add different billing details.

To create a new team: 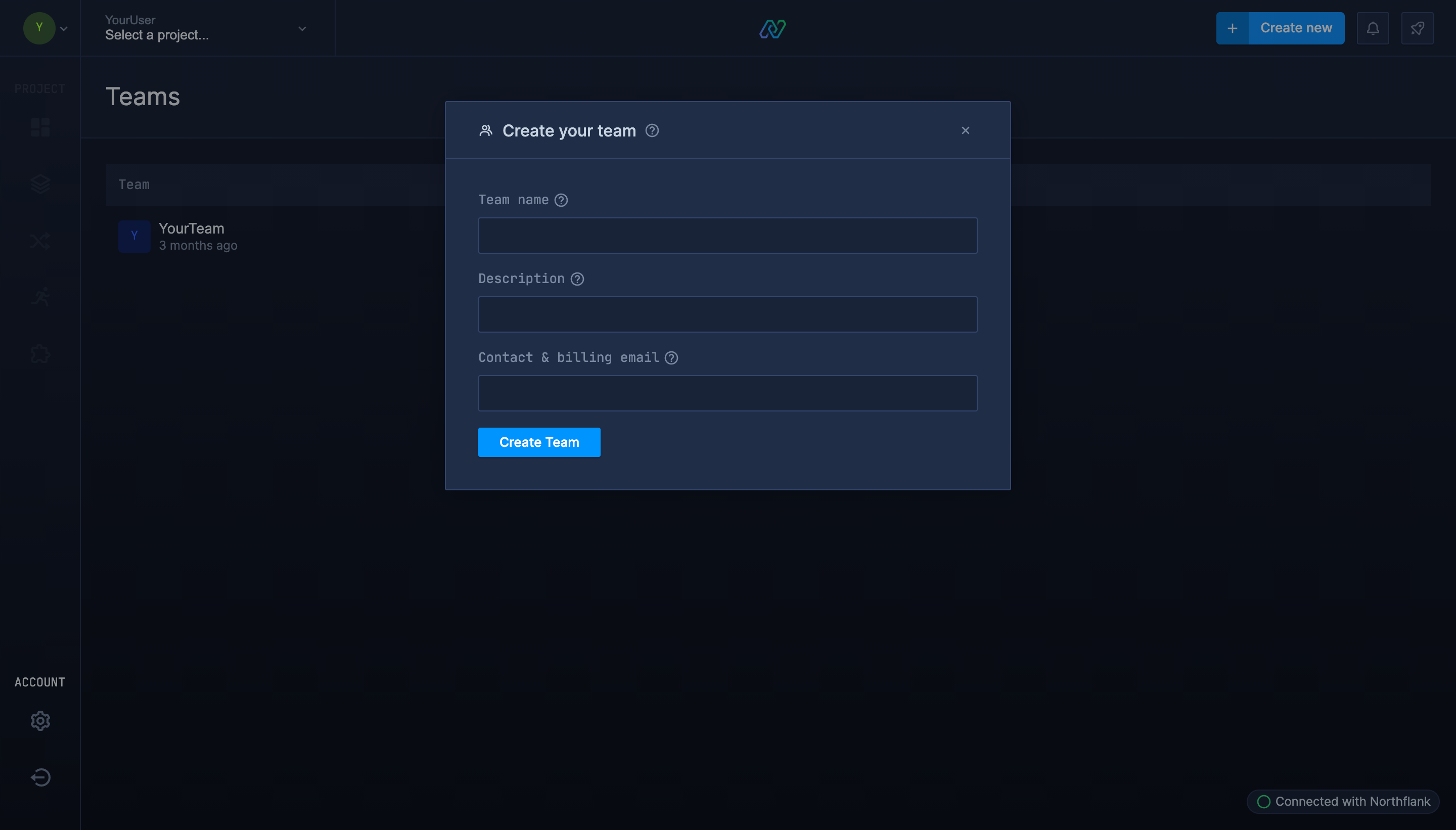 Inviting collaborators to a Team

You can invite collaborators to join a Team using their email address.

To invite someone to join your Team: 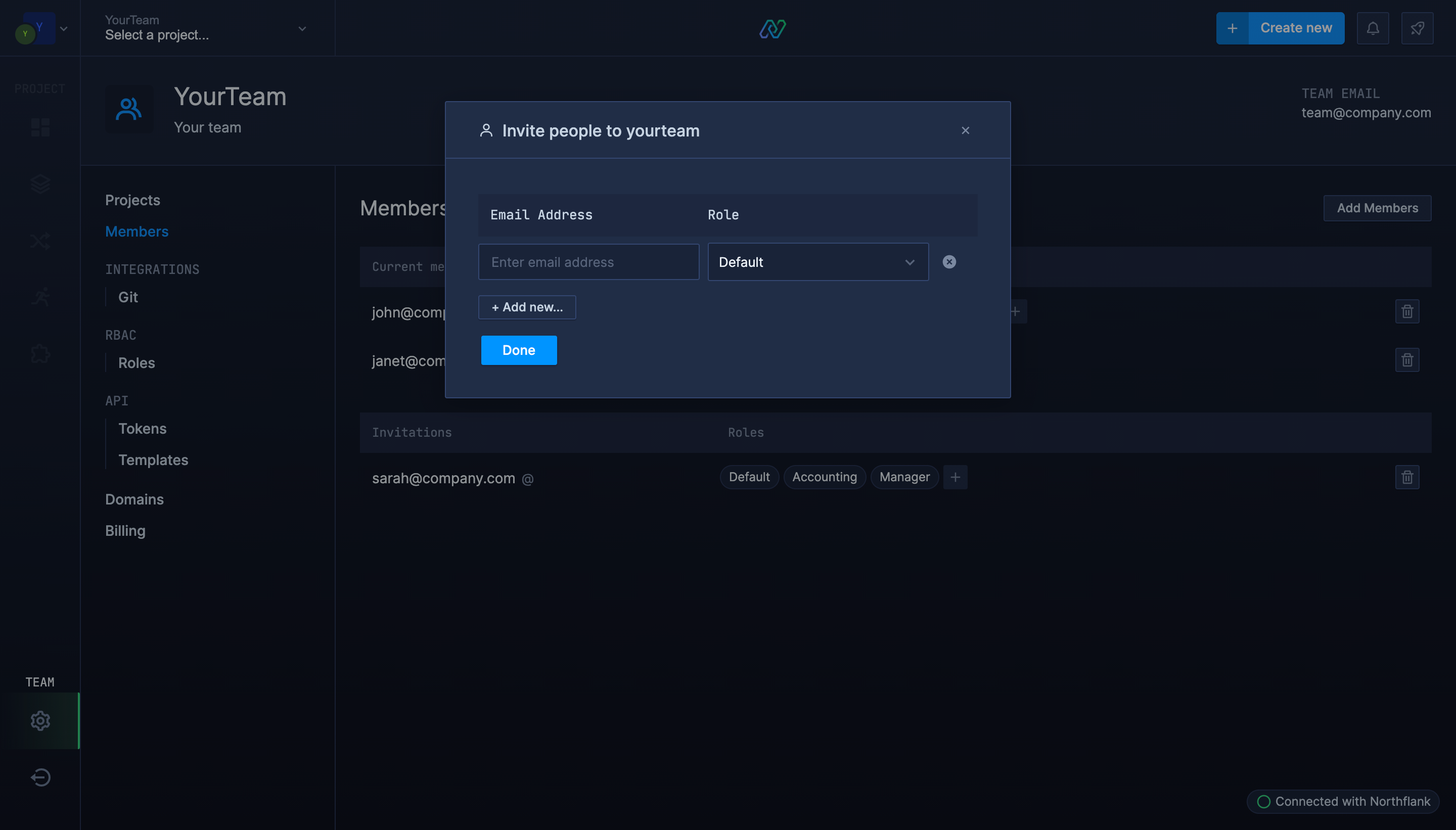 Removing a team member from the Team

Only members who are granted team permissions can remove other members. To remove a member: 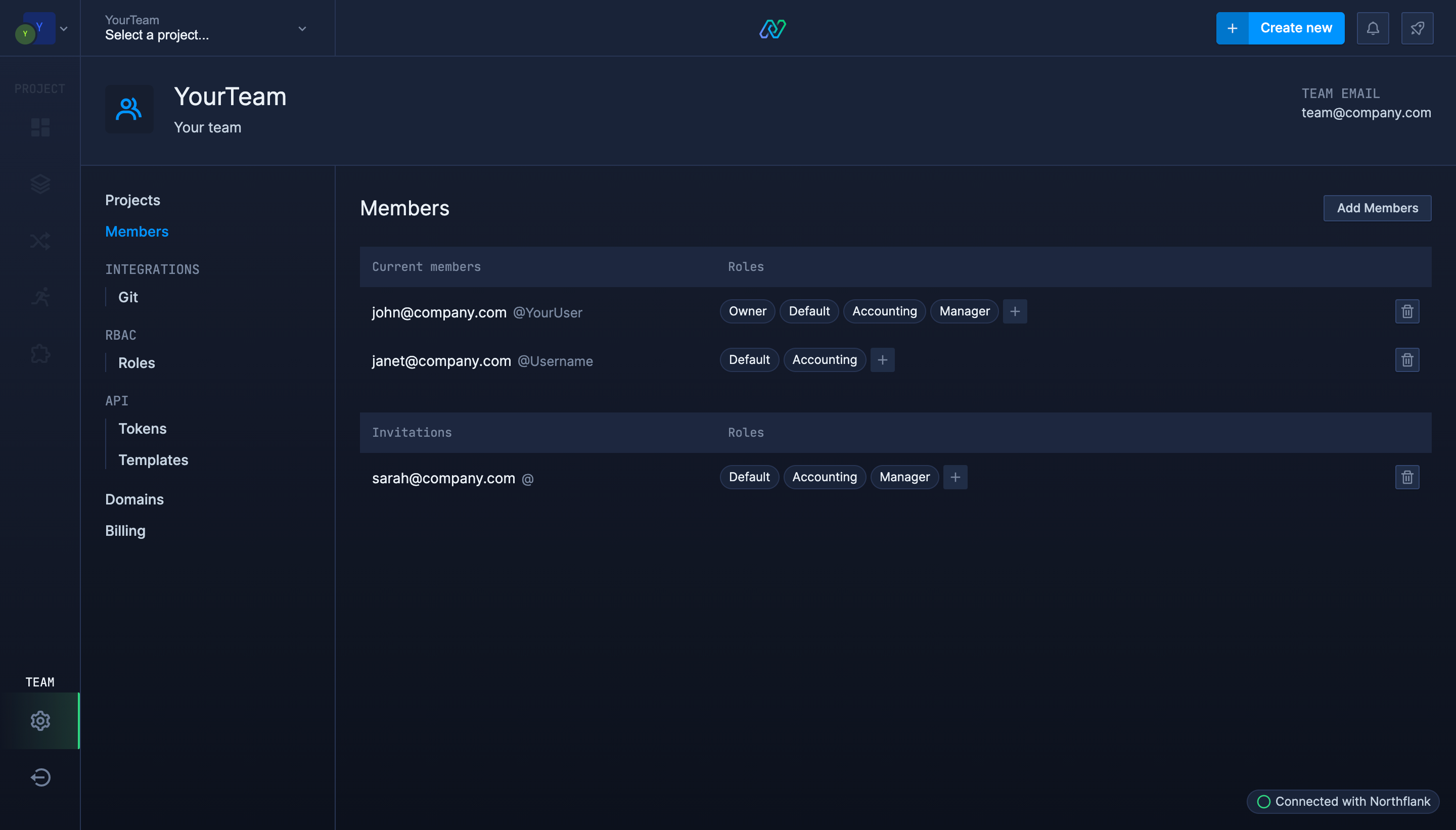 If you have been invited to a Team using the address associated with your Existing Northflank account, you will receive a notification in the Northflank dashboard. You can also join via an invitation link sent to your inbox.

If your email is not yet associated with a Northflank account, you will receive an invitation link. The linked page will prompt you to create a new User account. Once created, your account will be a member of the Team.

You can manage the permissions of your team members using role-based access control. Roles can be given specific permissions based on CRUD operations for the different Northflank resources (Projects, Services, Jobs, Pipelines, and Addons). Roles can also be restricted to certain Projects, and be given permissions to manage aspects of the Team itself.

You can view Roles and the permissions they grant to assigned members in the Roles tab in Team Settings.

When you create a Team you are given the irrevocable role of Owner. This Role grants all permissions across the entire Team account and cannot be assigned to other Users.

When you invite a user to a team they are automatically assigned the Default role, which cannot be removed. We recommend you check and modify the permissions granted by the Default role when you create your Team.

The Team owner can create and edit Roles in Team settings. The same goes for members that have been assigned Roles granting them the necessary permissions. 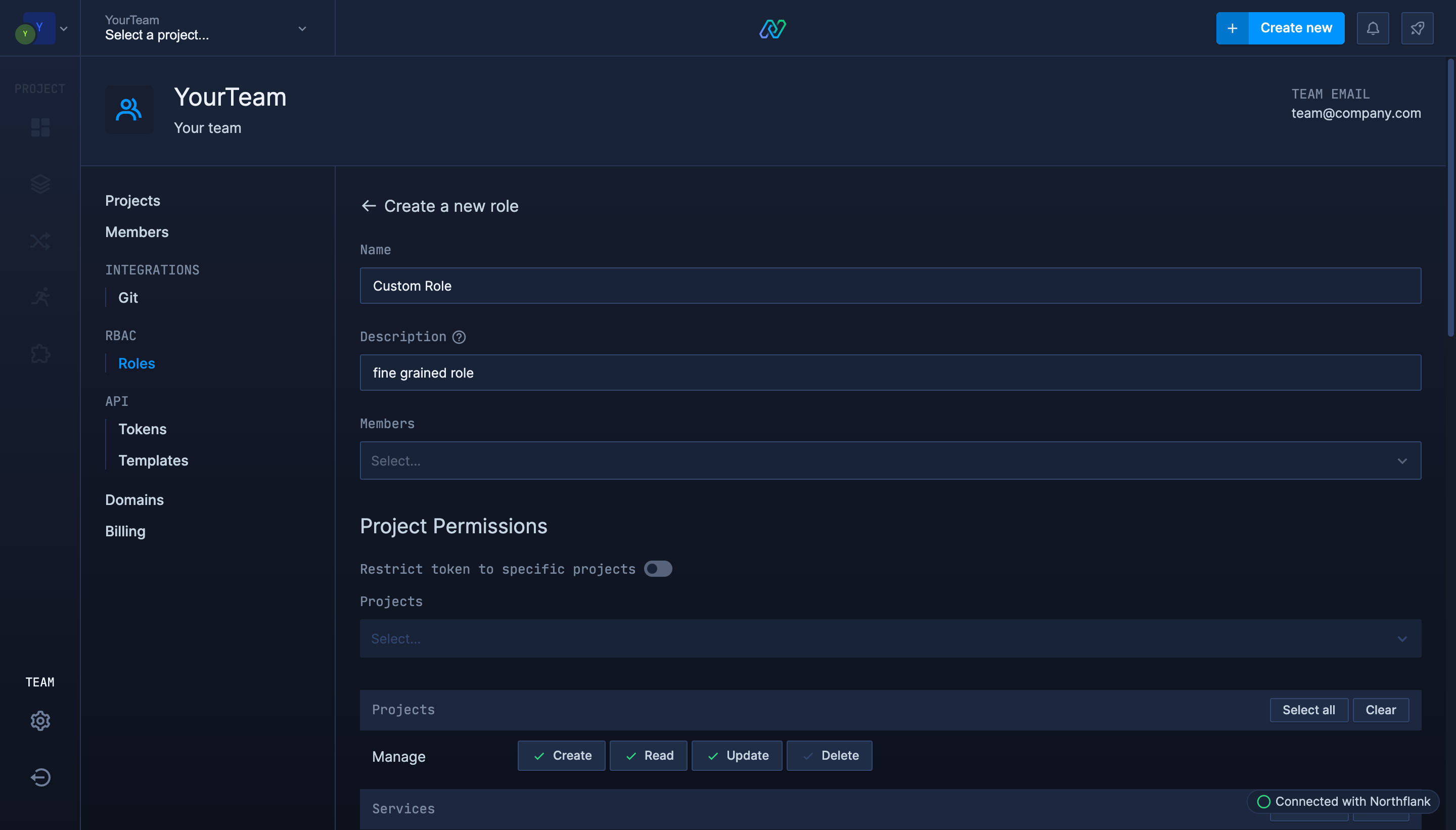 The Role will be removed from any Users it was assigned to.

You cannot delete the Owner or Default Roles.

Adding and removing Roles from Users

To add or remove Roles from a User in a Team: 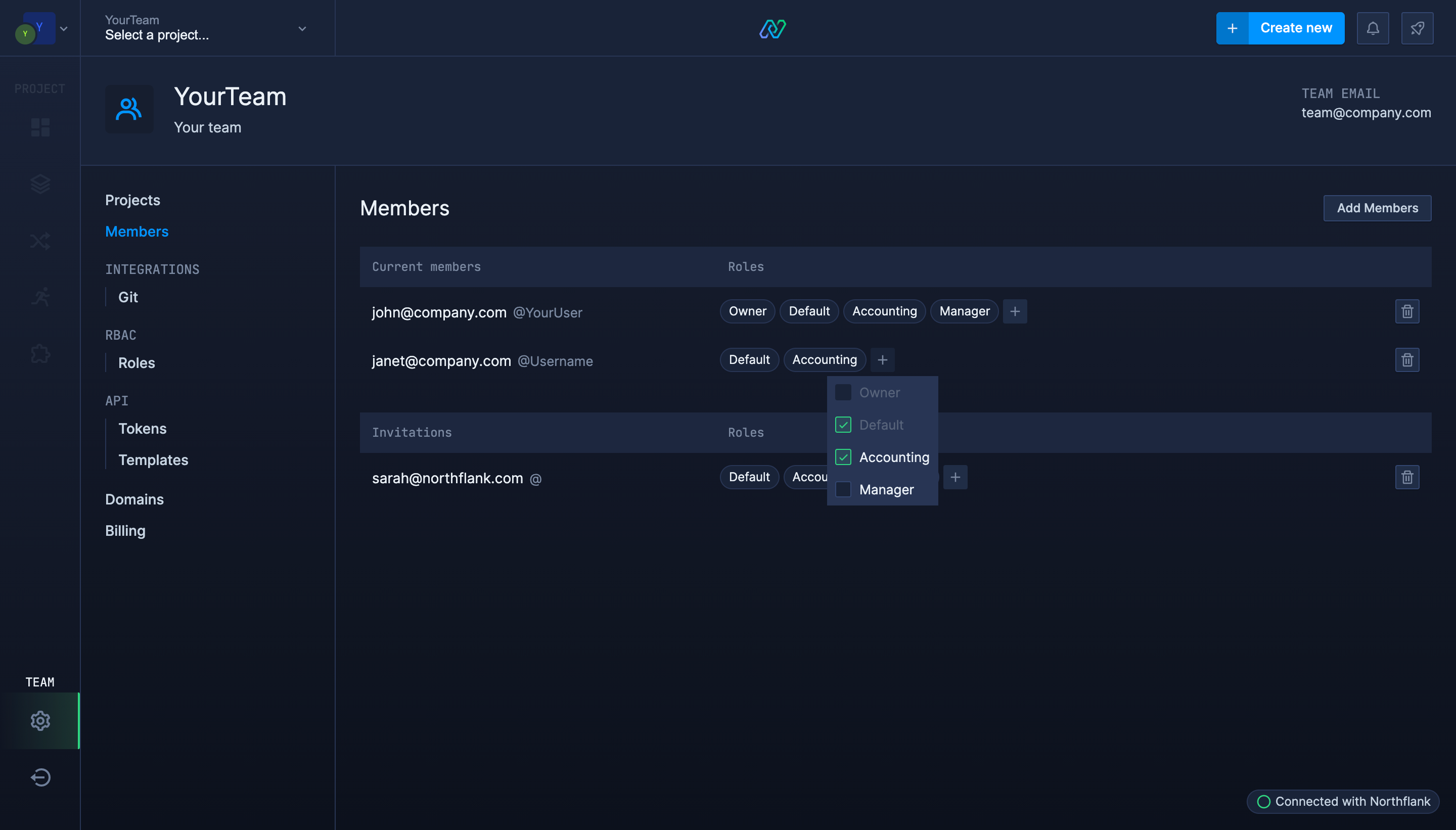 You can manage API access by creating API key templates and restricting them to certain roles. Users will then be able to create API keys based on these templates.

The Billing tab provides an overview of the costs the Team has incurred during the present month, the cards connected to the team account, and a history of invoice receipts.

All resources, such as Services, Jobs, Addons, used in Team Projects will be charged to the Team account. User accounts will not be charged for resources created in a Team.